Published: Sunday, 10 January 2016 14:03 | Print | Hits: 2347
Two years after their acclaimed Delivering the Black album Primal Fearunleash 'Rulebreaker' on the unsuspecting - or could that be suspecting - masses.

Released through Frontiers and produced by bassist Mat Sinner and Jacob Hansen the line up now includes Francesco Jovino on drums (returning after 10 years with U.D.O) and Tom Nauman back as a full member.

Nauman gives the line-up a three guitar attack along with Alex Beyrodt and Magnus Karlsson (also on keyboards) and of course Ralf Scheepers on vocals.

Kicking off with the fast driving riff and squealing guitars on 'Angels of Mercy' the tone is well and truly set. Scheepers is in top form and this continues on 'The End is Near' with its driving bass and drums. The lyric 'Do you wanna die?' Is the first of many horns in the air, sing-a-long moments. There's a great Accept style riff to this tune and Scheepers holds nothing back!

'Bullets and Tears' is a full on Judas Priest homage with a very Iron Maiden sounding bridge. Classic 80's NWOBHM and a very nice harmony guitar solo thrown in for good measure.

'Rulebreaker' is the first song to slow the tempo down a bit but has a chugging riff, nice bass line and the harmony guitars again (something which is prevalent throughout the album) An anthemic tune, as is next track 'In Metal we Trust'. Pretty self explanitory what this is about but with a quicker tempo again reminiscent of the mighty Priest. With lyrics like "Raise your Fist" this is clearly aimed at the fans and teh live environment..

Now for something completely different...and a bit of a gamble. 'We Walk Without Fear' is 11 minutes long. 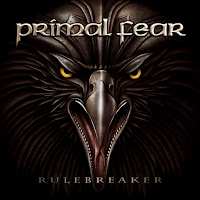 Starting out like a hybrid of a Sergio Leonne film score and Nightwish with its ticking watch, orchestral and choral arrangement the song explodes into a fast riff with double kick drums driving it on. The tempo alternates between fast and slow riffs throughout the song and has a lovely melodic guitar overlay. This gives the song an epic feel reminiscent of Avantasia with a brilliant dual guitar assualt on the solos. Ending like the final scene in 'The Good, The Bad and the Ugly' this is the standout track on the album and not a bit too long.

'At War With The World' brings the fast paced, melodic power metal riffage back to the fore and features another anthemic chorus.

In contrast to this 'The Devil in Me' has an early Dio style feel to it in the tempo, bass line and to a lesser extent the lyrics but also has that harmony guitar sound with a very catchy chorus.

'Constant Heart' has Scheepers at his screaming best on parts and is another fast paced tune. Jet fuel may not melt steel and guitar solos can't actually melt faces but if that were true the solos on this might stand a chance of doing so.

Penultimate song 'The Sky is Burning' is a classic metal ballad, switching between slow and mid tempo with a semi acoustic start and finish. The solo is right out of the 80's classic power ballads by bands such as the Scorpions and Sykes influenced Whitesnake.

'Raving Mad' is a fitting title for the final song which is fast with a chugging/ galloping riff which ends with solo's being traded seemingly for fun.

Primal Fear may not have re-invented the wheel here but are surely the standard bearers for classic metal and in 'Rulebreaker' they have produced their best album in years.

If you love Old Skool Heavy Metal that has you headbanging, air guitaring, foot tapping and/or screaming out the choruses with horns held high then this is the album for you.